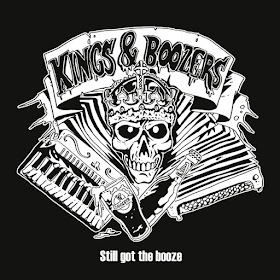 “Still got the Booze” kicks off with a spoken intro and then the lads deliver the title track, a kick-ass number to sing along. The song tells the tale of the band: maybe some people thought that they were going to fail, but they were wrong. “Seven Paddies in Berlin” is an upbeat tempo with rawer vocals. Kings & Boozers prove that they master the tin whistle-accordion-banjo sound and the backing vocals. The third original is track no. 6, “Queen of Hearts”. This number features the “Royal Lattina Orchestra of Bologna”. The musicians in Kings & Boozers have been a long time in the business and they know when they can take a risk. And it has paid off, since this song is a true gem.

Three Lady Godiva’s songs have been revisited. “One Whisky”, from the first album, is a killer song. “In God We Trust” was originally on their fourth album and I was not familiar with that song (I have only the other 3 albums in my CD collection). However, I have been surprised by this excellent number. “Remember the Time”, from their third album, is a nostalgic song but it fits perfectly into the album. Sadly, there are no songs from the second album, for instance “Mary” or “King of My Mad Brain” (my faves).

Mike Rivkees (Mickey Rickshaw) is a guest on the Irish song “Bold Fenian Men” aka “Down by the Glenside”. This is not an overexposed standard and the arrangements are class, particularly the electric guitar. On the other hand, “Wild Rover” is really an overexposed standard. Nevertheless, Kings & Boozers perform a magic trick to give it a new lease of life, and it works: the lyrics are the real ones, but the music is that of Stan Jones “Ghost Riders in the Sky”.

Kings & Boozers have also covered a couple of comedy numbers, Mike Cross “Drunken Scotsman” and Pat McCurdy “Sex & Beer”. Both of them get the Celtic punk treatment.

Finally, Kings & Boozers have recorded a couple of songs written by their folk punk heroes, The Pogues and The Whisky Priests. “Everyman is a King” is a B-Side written by Terry Woods and Ron Kavana and can also be found on the “Peace & Love” remastered and expanded re-issue from 2004. One again, the lads have chosen a great song and have recorded a respectful cover. “The Raven” is a song from The Whisky Priests “Timeless Street” album from 1992. The Kings & Boozers rendition is more than a cover: Gary Miller and Mick Tyas are guests on this track and the final result is bloody good!

There was neither musical differences, nor disputes between old friends when Lady Godiva called it quits. Some of the members wished to keep on playing and they chose a new name, Kings & Boozers. It would have been easier if they had released the CD as Lady Godiva. But Kings & Boozers are not a reformation, but a new band. And they have dealt with love and respect the Lady Godiva’s legacy and have issued an enjoyable album. Hats-off!
Track listing: