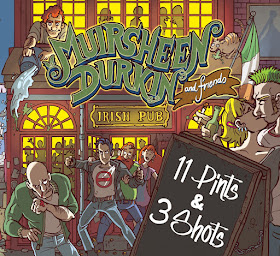 The album kicks off with “Another Drunken Night”, a catchy song and one of the best numbers on the CD.  Another self-penned song is track no. 8, “Land of the 1.000 Mountains”, an interesting song . Muirsheen Durkin & Friends have re-recorded “Drink with the Irish”, the addictive song from their previous EP. Together with these top quality songs, the 6 boys and the 2 girls deliver a couple of amazing instrumentals: “Peggy the Waitress” has a The Pogues touch thanks to the accordion, the tin whistle and the banjo, while “McRuenkers Junk” blends a tune by McRuenker and Lanze with a well-known polka. “One Whiskey” is not exactly a self-penned song, but a fantastic classic song by Lady Godiva written by McRüenker. Now they have added the “E” to whiskey (the original song is titled “One Whisky”) and changed some words.

Muirsheen Durkin & Friends also cover a The Pogues song. Fortunately, the band from Arnsberg have not made an easy choice and they have selected a song from The Pogues box set “Just Look Them Straight in the Eye and Say: Pogue Mahone!” written by Jem Finer: “The Last of McGee”. The final result is quite impressive. There is also a shanty, but this time a song that has been covered a lot of times after The Dreadnoughts recorded their rendition, “Old Maui”. It gets a full band treatment and has top-notch tune towards the end of the song.

Finally, there are 5/6 standards that are sung by the girls or feature the pipers. “Botany Bay” has two versions, the Celtic punk one and the reggae one that closes the album. “Donald Where Your Troosers”, a song written by Andy Stewart, is the other number sung by the girls and, IMHO, it sounds better. Following with the Scottish side of the album, there is a selection of traditional and modern pipes tunes. “Wild Mountain Thyme” is covered with gusto: electric guitar, pipes, accordion, percussion and female backing vocals. “Itchy Fingers” is a hornpipe written by Pipe Major Rab Pinkman of the “King’s Own Scottish Borderers” in the 20th century. I think that the first Celtic punk band to record this tune was The Gentlemen (“War Time in North London” from their debut album “Stick to Your Guns”, 2009). Muirsheen Durkin & Friends rendition is spotless with hey and yeah shouts and great percussion. The last Scottish number is “When the Pipers Play”. The song is originally titled “The Water is Wide”, but Scottish folk singer Isla St. Clair changed the lyrics to the song and renamed it as “When the Pipers Play”.  Pipes & Pints recorded “When the Pipers Play” for their debut album “Until We Die” in 2009, while Black Tartan Clan included “The Water is Wide” in their third album “Don’t Walk Alone” in 2012.  Muirsheen Durkin & Friends have blended both covers, as the first half of their song is reminiscent of The Black Tartan Clan, while the second half would be inspired by the Pipes & Pints cover. Anyway, they have not chosen the Isla St. Clair lyrics, but written new lyrics to the song and there are awesome female backing vocals.

“11 Pints & 3 Shots" comes in an excellent 6 panel digipack, together with a 20 page booklet including the lyrics to all of the songs and a lot of pictures.  As usual, the final result is excellent, but I’m still waiting for an album by Muirsheen Durkin & Friends where there are more self-penned songs and less covers. Come on guys, you can do it! 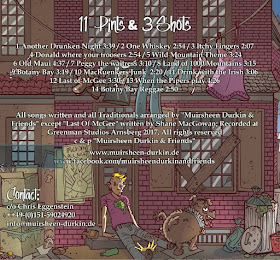